To share your memory on the wall of John Brooks, sign in using one of the following options:

Provide comfort for the family of John Brooks with a meaningful gesture of sympathy.

John graduated from high school in San Pedro, California in 2001. Shortly, after graduation John moved back to Boston to reconnect with his late mother Andy until her passing in 2011. John met Francesca Jeudy in 2009, who gave birth to their beautiful and energetic daughter Mae Andy Brooks. Mae is full of John’s spirit and carries herself with the same charisma as her father.

John danced to the beat his own drum literally and figuratively. He embraced life in a way that some envied. John’s love was unconditional and passionate, he made friends everywhere he went embracing anyone. He was a lot like his mom as their mantra was to live life to the fullest.

John was active and you might see him riding down the street on his skateboard, backpack on and singing or rapping to something with a fly beat. He had a love for the outdoors and enjoyed spending time with his daughter; fishing, rowing a boat or playing at the park. The love he personified for his daughter was powerful and you felt while in their presence
.
John had a passion for food, at that good food! If you were his Facebook friend you would know. He would post videos and picture of his adventurous and diverse cuisine. He loved music and dancing, you would often see him showing off his Cali style moves with a Caribbean flare. John had a unique style that he pulled off well. John was definitely one of a kind!

We encourage you to share your most beloved memories of John here, so that the family and other loved ones can always see it. You can upload cherished photographs, or share your favorite stories, and can even comment on those shared by others. 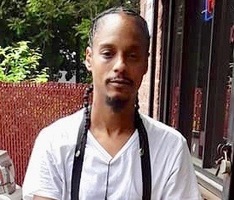