To share your memory on the wall of Minnie Dillahunt-Mixon, sign in using one of the following options:

In 1962, the family relocated to Boston, Massachusetts where she received her formal education in the Boston Public School System, graduating from the Jeremiah E. Burke High School for Girls in 1966.

Minnie was a member of 3 Regent Street Church of God in Christ, under the leadership of the late Bishop L. C. Young where she sang in the Junior Choir. She was also a member of the Royal Gospeletts and the Dillahunt Sister, singing praises unto God. She later moved her membership to Southern Baptist Church under the then leadership of Rev. James Chance and now presently under the leadership of Pastor James Harrison. She served a term as President of the Awards and Scholarship Committee. She attended faithfully until her health declined and she could no longer attend.

Minnie shared 48 years of love with Elbert Mixon and on July 6, 1996 they were joined in Holy Matrimony.
Minnie was employed at Massachusetts General Hospital (MGH) for a few years before moving on to Brigham and Women’s Hospital where she retired after 40 years of service.

To send flowers to the family or plant a tree in memory of Minnie Bell Dillahunt-Mixon, please visit our Heartfelt Sympathies Store.

We encourage you to share your most beloved memories of Minnie here, so that the family and other loved ones can always see it. You can upload cherished photographs, or share your favorite stories, and can even comment on those shared by others.

Posted Oct 10, 2019 at 02:56pm
The loss is really felt. As her Goddaughter, I was lucky enough to have received first-hand her love and kindness. If anything had happened to my parents, I know she would have been there for me. Through our relationship, she gave me the only brother I have - my Godbrother Chris. My condolences to you and my Godfather Bill. p.s. I looked forward to going to her house during Christmas time to pick up my gift because she gave the best presents.
Comment Share
Share via: 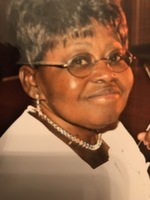