To share your memory on the wall of Mary Westfield, sign in using one of the following options:

Provide comfort for the family of Mary Westfield with a meaningful gesture of sympathy.

Her education extended to the sixth grade. She became a homemaker with limited outside employment. Her aunt and uncle later adopted another child, Jesse Swanson. His raising and daily care became Mary’s responsibility, and she claimed him as her own child.

In later years, Mary made a transition to Boston, MA, where she had many friends and acquaintances. She later migrated to Brockton, MA where she joined the Messiah Baptist Church and was a member for over 30 years. She was an active member of the Voices of Inspiration Choir, and a faithful member of the Missionary Society. She was also active in the Hallelujah Voices, a community theater and music organization under the direction of Dr. Julius Coles. She committed her thoughts, prayers and financial contributions to her church up until her last days. The Messiah church family was always important to her and a source of pride when allowed to share her faith and associations.

During her move to Brockton, she extended her family to include The Howard Family of Messiah. She loved, nurtured, and committed herself to the children of this family, as well as other children of Messiah and the community. A special and life-long bond was created with Deacon Robert Howard, Sr., who she fondly called “Deac”. She constantly referred to him as her rock, and the one person on the earth she was fiercely loyal to and with whom she trusted without reservation.

Remembering Mary Ann Westfield are many who include her son, Jessie Swanson (Janice) of Rome, Georgia; her half-sister, Marie Alexander of Rialto, California, and a host of friends and associates.

We encourage you to share your most beloved memories of Mary here, so that the family and other loved ones can always see it. You can upload cherished photographs, or share your favorite stories, and can even comment on those shared by others. 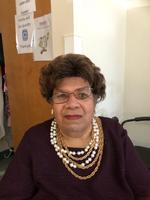