To share your memory on the wall of Clementine Clachar, sign in using one of the following options:

Clementina, known to many as “Baby Lou” or “Miss Clem” was a woman who radiated poise, class and resilience. She was persistent in her desire to seek out knowledge in any subject she desired. She took pride in her thirst for education, enrolling in numerous trade classes, which played a role in her extensive knowledge in technology and nursing. Clementina had a high-spirited personality and was known by many for her endearing and humorous nature. Clementina believed there was nothing that could get in her way when she held the gift of prayer. She displayed the pureness of an angel and lived her life based on the values of love, godliness, and determination. Her intentions were always honest, and she showed love unto others for the joy of making this world a better place.

She was an extraordinary mother who went above and beyond for her family. Clementina was a god-fearing woman with a big heart and loved everyone as though they were her own. She loved shopping and was a bargain hunter; a skill she passed on to everyone who went shopping with her. But she wasn’t just shopping for herself….each year she would go to Jamaica and inevitable she would pack items for friends, family, neighbors, someone she had met in a chance meeting or those she knew were in need. Her greatest joy was being with her family during the holidays. She would begin her Christmas shopping in April and started wrapping gifts in September. Whenever anyone visited at Christmas time, they would leave with a gift. They would be instructed to go to a particular room and told exactly where to find the gift, including the color wrapping paper. Her favorite pastimes were shopping and crossword puzzles.

Clementina laid the foundation of hard work and instilled strong principles and morals in her family. Throughout her professional career, she exhibited qualities of dedication and diligence, which made her stand out from her counterparts. She found professional and personal joy in the work she did in caring for others, which lead her to the field of health services and employment at John Scott Nursing Home, Mass General Hospital, Beth Israel Deaconess Medical Center and Carney Hospital. After retiring, she volunteered her time at the polling station as an election worker.

Clementina accepted Christ in 1980. In 1995, she rededicated her life and became a member of Pentacostals of Boston Church, Hyde Park, MA. As a member, she served faithfully and provided mentorship and support to various members of the church; both young and old. She made it her primary concern to provide the church with food, supplies, donations and assisting various families that were in need of help, privately.

We encourage you to share your most beloved memories of Clementine here, so that the family and other loved ones can always see it. You can upload cherished photographs, or share your favorite stories, and can even comment on those shared by others. 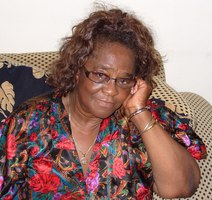